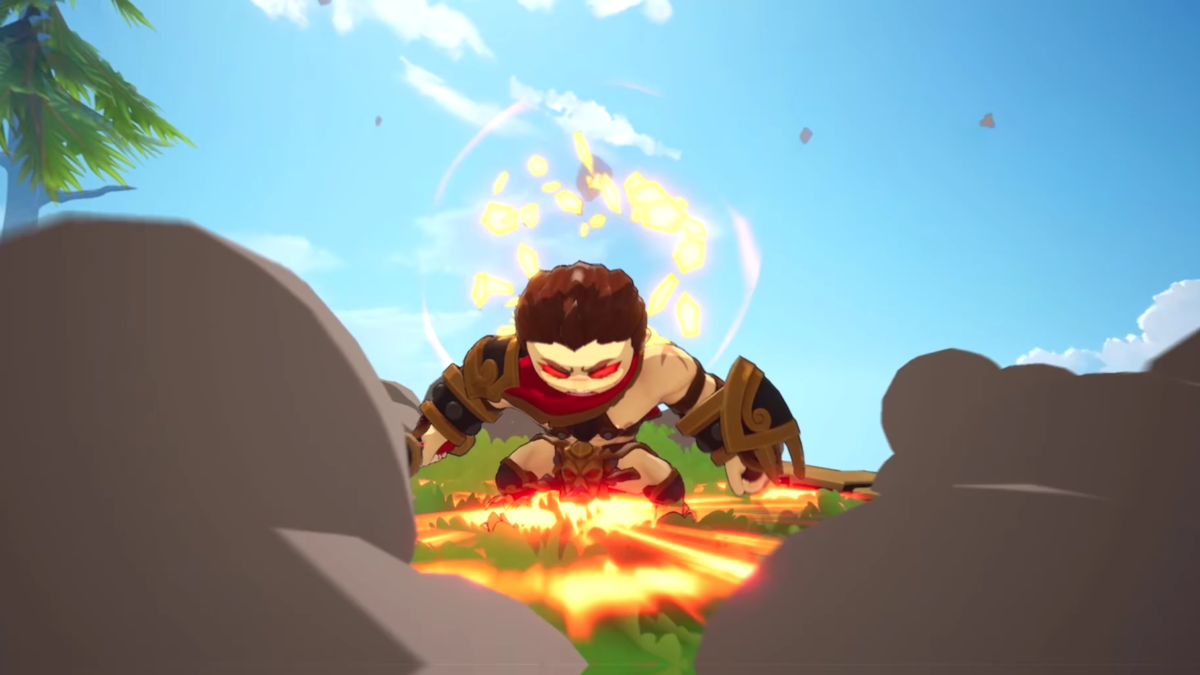 Divine Knockout (DKO) is a platform fighter played from a third-person perspective. In it, players select a mythological character (a God with superpowers) from a list of options and unleash its powerful moves in combat with other characters.

The gameplay is intuitive and the controls are simple. Players have to complete sets of levels, which earn them God tokens that can be used to unlock more God characters. Each playable character has their own “level up pass” that grants them access to valuable bonuses as the player progresses through the game.

Combat feels smooth and the Gods’ powers are balanced in such a way that no one feels too overpowered during a battle. Players can disable their opponents’ defenses by dealing them damage, and then finishing them off with a knockout strike.

There are multiple arenas and each of them features a different gameplay mechanic that players need to master in order to win. Some of the arenas are full of traps that need to be avoided, while others collapse over time, pushing the player to act fast.

The playable characters can be customized with a number of skins and skill sets to fit the player’s personal preference. Some of the customizations are accessible for free while others are locked behind a paywall.

There are several game modes to try on and they all focus on different gameplay experiences. Players can engage in 3v3 battles or play intense 2v2 and 1v1 duels.

Divine Knockout (DKO) deviates from the standard formula by taking place in a 3D environment with well-thought-out map designs. The game looks beautiful and offers a lot of fun for everyone who is a fan of action and fighting thanks to its addictive and simple-to-master gameplay.

Can you play Divine Knockout (DKO) on Mac?

Even though there is no official macOS version of Divine Knockout (DKO), it is still possible to play this game on your Mac using a few workarounds. For instance, thanks to Windows virtualization software, Mac users can play games that were never intended for their platform.

To use Windows programs and games that don’t work on a Mac, you’ll need to set up a Windows Virtual Machine using third-party software like Parallels or Apple’s Boot Camp Assistant. If you want further information about how to install these programs, click on the links below.

A Windows emulator must be installed before Divine Knockout (DKO) can be downloaded on your Mac. If you’re just getting started, we recommend giving tools like Parallels and Boot Camp Assistant a try.

You don’t have to be a software installation expert to have a good gaming experience with any of these apps. But there’s something you need to know before you choose between the two options. While Parallels is compatible with both Intel and M1 Macs, Boot Camp Assistant only works with Intel Macs.

How to Play Divine Knockout (DKO) on Mac?

You can play Divine Knockout (DKO) on Mac after you install Windows on your Mac via Parallels or Boot Camp Assistant.

Before you do that, however, you will need to get the game.

How to play Divine Knockout (DKO) on Mac M1?

You can play Divine Knockout (DKO) on a Mac with an M1 CPU after you install a Windows Virtual machine with Parallels. This software allows you to play this and other games that aren’t officially supported on Mac M1 with ease. The process is not complex, but you need to follow certain steps in order to set up everything and have Windows running on your Mac OS.

Once you do that, you can play Divine Knockout (DKO) by downloading the game from your gaming store (Steam, Epic Games) and installing it with the store client on the newly created Windows virtual machine on your Mac M1.

Keep in mind that the methods below are only workarounds that do not guarantee you a gaming experience that is identical to the experience you would get on a Windows PC.

You can play Divine Knockout (DKO) on Mac (M1 and Intel models) by installing Windows on your Mac with Parallels. Read our detailed guide.

How to Divine Knockout (DKO) with Parallels

You can play Divine Knockout (DKO) on Mac (Intel models only) by installing Windows on your Mac with Boot Camp Assistant. Read our detailed guide.

How to Divine Knockout (DKO) with Boot Camp
Mac How To, reviews