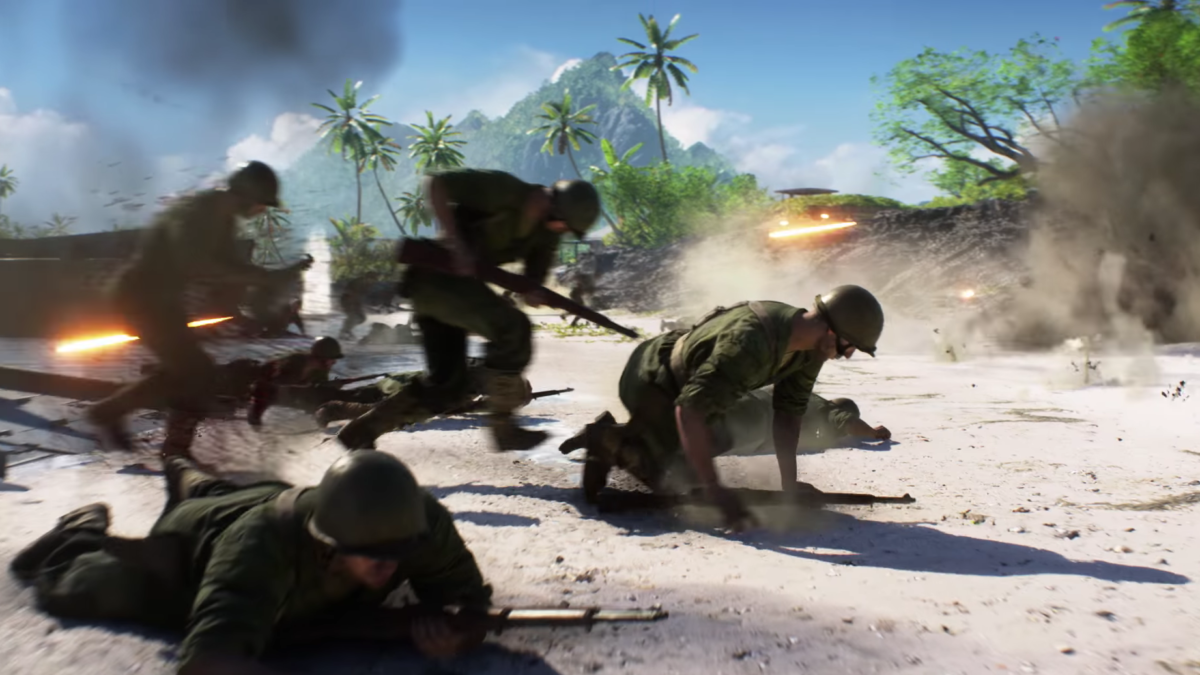 Battlefield V is a shooter played from a first-person perspective. The game is the sequel to 2016’s Battlefield 1, making it the series’ eleventh main entry. The setting of the game is based on the Second World War and takes players right into the heart of a fierce battlefield.

In terms of gameplay, Battlefield V puts a strong emphasis on cooperative elements, resource scarcity, and realistic game mechanics. The developers have worked to remove abstractions from the game and increase authenticity as much as possible.

A rich customization system allows players to personalize their experience by creating multiple characters and equipping them with a wide variety of cosmetic items and weapons. Completing in-game objectives unlocks more cosmetic items and gadgets.

Similarly to Battlefield 1, in Battlefield V, players can experience a variety of single-player “war stories” based on different moments of World War II. The campaign begins with an introductory chapter and continues with episodes of these war stories. What makes an impression is that the voiceovers in each of these stories are represented in their own native language.

Multiplayer supports up to 64 players, which can be divided into a maximum of 16 teams, with an emphasis on cooperative play. There are several new multiplayer modes in this release, including Firestorm, which puts players in a literal storm of fire that constricts them, and Grand Operations, which features matches that take place across multiple stages.

A cooperative mode called “Combined Arms”, which has not been seen in a Battlefield game since Battlefield 3, allows up to four players to take on missions together. What makes this mode enjoyable is that it features dynamic missions and objectives, which means that each round is played in a different way.

Battlefield V is an action game that gives players a lot to do. Everyone who is a fan of war games can find something to their liking, be it the thrilling battles, the compelling collection of single-player war stories, or the rich character creation options. So, if you are into realistic war experiences, make sure you check out this title.

Can you play Battlefield V on Mac?

Those who own Macs and are eager to play Battlefield V may be relieved to hear that the game can be played on their machines. There is no official MacOS version of the game though. So, for this reason, players will need to resort to some workaround methods that can help them play Battlefield V for Windows on a Mac.

Using a cloud gaming service, such as Boosteroid or GeForce Now to play Battlefield V on a Mac is the fastest and most convenient option. Playing in this way eliminates the need to save or install the game on the player’s machine since it can be done directly in the browser.

Alternatively, the Windows version of Battlefield V can be played on a Mac by installing Windows using a virtualization tool like Parallels or Boot Camp Assistant and then downloading and installing the game.

Before installing Battlefield V on a Mac, first, you need to install and run Windows OS on your macOS system. Although this may seem like a complicated process at first, using Windows emulation software like Parallels or Apple’s Boot Camp Assistant (for Intel Macs only) makes the installation a breeze. Below are links to pages on our site that provide more detailed information on how to use these two programs.

If you have Windows installed on your Mac, you can buy Battlefield V from a game shop and install it using the store’s client, in the same manner, you would do on a Windows PC.

How to Play Battlefield V on Mac?

You can play Battlefield V on Mac with Boosteroid or GeForce Now, or after you install Windows on your Mac via Parallels or Boot Camp Assistant.

How to play Battlefield V on Mac M1?

Battlefield V can be played on a Mac M1 by simply subscribing to a streaming service like Boosteroid or GeForce Now. A Mac machine, an internet connection, a web browser, and a membership to a cloud gaming service of your choice that supports the desired game are all that’s required to get started. Those who are concerned about using up too much storage space on their system may also appreciate not having to install the game.

You can, of course, run Windows in a simulated environment on macOS using a virtualization tool like Parallels and enjoy the game that way. By using this method, your gaming experience will be unaffected by the speed of your internet connection.

Keep in mind that, since the Boot Camp Assistant is not compatible with the M1 CPU architecture, you cannot use it to install Windows on a Mac M1.

The links below provide more details on all the methods that we speak about, so feel free to check them out if you need more assistance.

You can play Battlefield V on Mac (M1 and Intel models) with Boosteroid. Read our detailed guide.

How to Play Back V Blood with Boosteroid

You can play Battlefield V on Mac (M1 and Intel models) with Geforce Now. Read our detailed guide.

How to Play Battlefield V with Geforce Now

You can play Battlefield V on Mac (M1 and Intel models) by installing Windows on your Mac with Parallels. Read our detailed guide.

How to Play Battlefield V with Parallels

You can play Battlefield V on Mac (Intel models only) by installing Windows on your Mac with Boot Camp Assistant. Read our detailed guide.

How to Play Battlefield V with Boot Camp
Mac How To, reviews