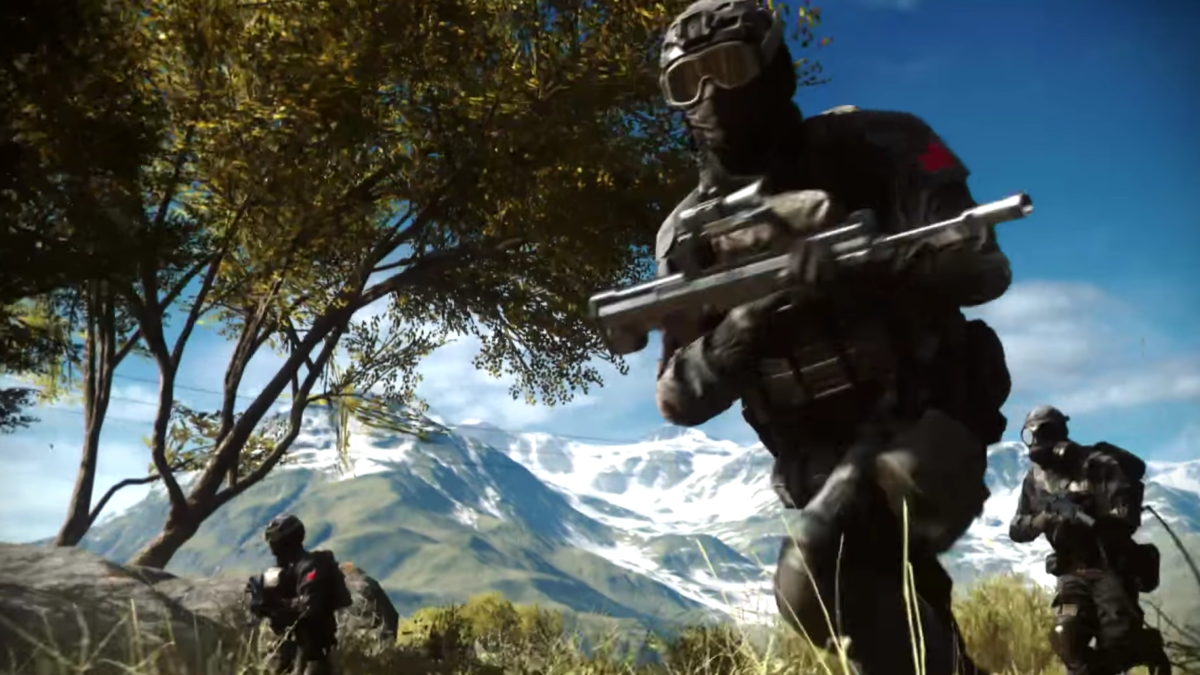 Battlefield 4 is a first-person shooter video game released in 2013. The title is a sequel to 2011’s Battlefield 3 and immerses players in a fictional war that takes place in 2020.

In Battlefield 4, players have more offensive and defensive options than they did in the last game. For example, they can block melee attacks while standing or crouching, shoot while swimming, and dive underwater.

An expansive weapon customization system allows players to personalize their weapons in a variety of ways. Attachments and “skins” for camouflage can be added to all primary, secondary, and melee weapons.

Some of the weapons now have selectable firing modes such as automatic, semi-automatic, and burst fire.

The system for dropping bullets has been greatly improved, so players will need to change how they fight at medium and long ranges.

The setting for Battlefield 4’s single-player campaign is the fictional “War of 2020”,  in which the tension between Russia and the United States has reached an all-time high, involving China in the conflict.

Players play as Sgt. Daniel “Reck” Recker, a member of a U.S. Marine Corps squad codenamed “Tombstone”. The majority of the game consists of sandbox-style levels that the player must traverse, sometimes making use of tanks and boats. The campaign consists of specific tasks that have to be completed. Upon completion of the tasks, players can get access to weaponry that can be used in multiplayer.

There are three playable factions in Battlefield 4’s multiplayer mode: the United States, China, and Russia. They fight with each other in matches with up to 64 players.

A Commander Mode (first introduced in Battlefield 2142) allows one player from each faction to have a real-time perspective of the whole battlefield and the ability to issue commands to teammates. This player can also see what the other players see on the map, place vehicles and weapons in key spots, and use missiles to attack enemy strongholds.

A new Spectator mode allows players to watch other players from a first- or third-person perspective and see the map from any angle.

The kits from the previous game (Assault, Engineer, Support, and Recon) make a return in Battlefield 4, but with some tweaks that give players new ways to use them.

The multiplayer introduces new vehicles like a Type 99 tank, a ZW-10 attack helicopter, and a ZFB-05 armored car.

The game is built on a new Frostbite 3 engine, which allows for resolutions of higher quality as well as the implementation of a number of visual effects.

Battlefield 4 is a game that offers plenty of tactical challenges and an interactive environment where your teamwork and individual skills will determine how far you can go.

Can you play Battlefield 4 on Mac?

Mac users who are fans of Battlefield 4 may be glad to learn that the game can be played on their machine. But unfortunately, since there is no official MacOS version of the game, this can’t happen natively and players will have to resort to a few workarounds if they want to enjoy Battlefield 4 for Windows on their Mac.

The quickest and most hassle-free way to play Battlefield 4 on a Mac is by subscribing to a cloud gaming service like Boosteroid or GeForce Now. When played in this manner, the player need not download or install the game, since it may be played from inside their browser.

It is also possible to play Battlefield 4 on a Mac without resorting to a cloud gaming service by installing Windows using a virtualization application like Parallels or Boot Camp Assistant and then running the Windows game version.

If you want to download Battlefield 4 on your Mac, you should know that you won’t be able to do that unless you download and install Windows OS first. We know that this may sound like something very complex at first, but the whole process is really simple with the help of Windows emulation software like Parallels or Apple’s Boot Camp Assistant (for Intel Macs only). If you click on the links below, you’ll be sent to pages with further details on how to make use of these two applications.

Battlefield 4 can be purchased from a game store and installed via the store’s client in the same way as it would be on a Windows PC after Windows has been installed on your Mac.

How to Play Battlefield 4 on Mac?

You can play Battlefield 4 on Mac with Boosteroid, or after you install Windows on your Mac via Parallels or Boot Camp Assistant.

How to play Battlefield 4 on Mac M1?

Playing Battlefield 4 on Mac M1 is easy as long as the player subscribes to a streaming service like Boosteroid or GeForce Now. Using a cloud service to play games online has its advantages. To begin, all one needs is a computer, an internet connection, a web browser, and a subscription to a cloud gaming service that supports the desired game. Those who are limited in disk space may also enjoy not having to download and install the game.

Of course, if you use a virtualization program like Parallels to set up a Windows environment under macOS, you can play the game there. The advantage of this method is that the speed of your internet connection won’t affect your gaming in any way.

It is not possible to utilize Boot Camp Assistant to install Windows on a Mac M1 since it is not compatible with the M1 CPU architecture.

If you own a Mac and want to know how to play Battlefield 4, click on the links below (both M1 and Intel) to see more detailed instructions.

Play Battlefield 4 on Mac with Boosteroid

You can play Battlefield 4 on Mac (M1 and Intel models) with Boosteroid. Read our detailed guide.

How to Play Back 4 Blood with Boosteroid

You can play Battlefield 4 on Mac (M1 and Intel models) with Geforce Now. Read our detailed guide.

How to Play Battlefield 4 with Geforce Now

Play Battlefield 4 on Mac with Parallels

You can play Battlefield 4 on Mac (M1 and Intel models) by installing Windows on your Mac with Parallels. Read our detailed guide.

How to Play Battlefield 4 with Parallels

You can play Battlefield 4 on Mac (Intel models only) by installing Windows on your Mac with Boot Camp Assistant. Read our detailed guide.

How to Play Battlefield 4 with Boot Camp
Mac How To, reviews