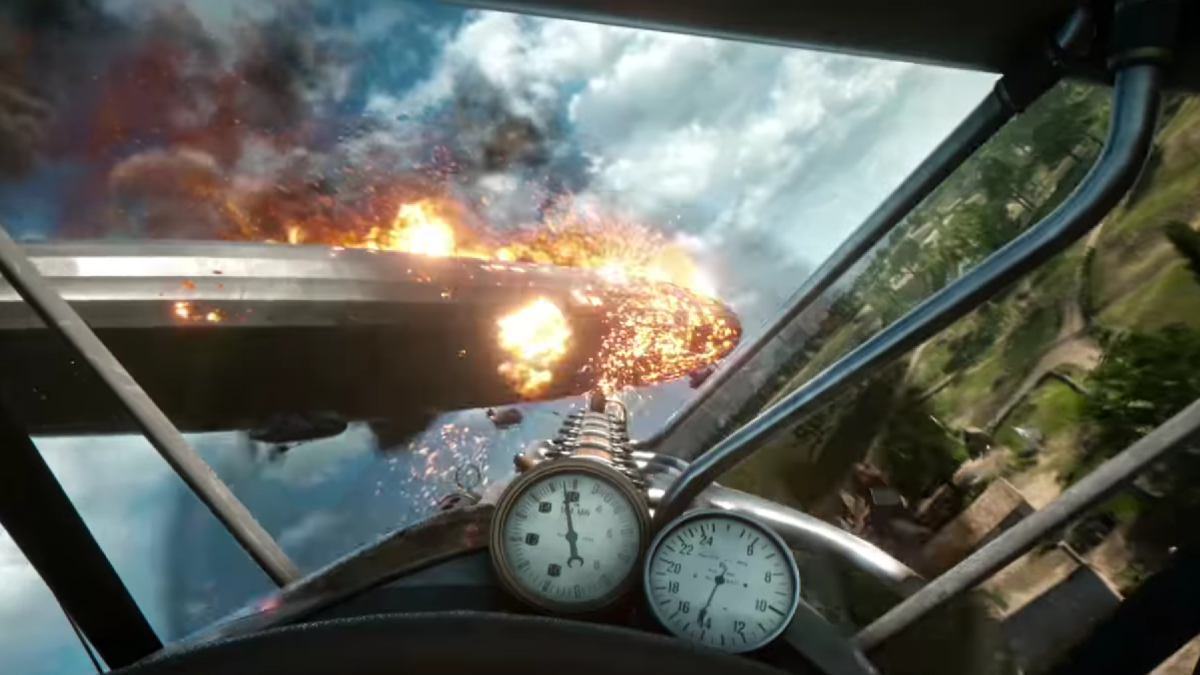 Battlefield 1 is a first-person shooter game with an emphasized focus on collaboration between the players. The game is the tenth in the Battlefield series, and it takes place during World War I.

As a player, you take part in the global conflicts of that time by fighting in various locations all over the world. You can use weapons and technology from World War I, drive different vehicles, and use strategies that can change the course of the game.

As in previous games in the series, battlegrounds in Battlefield 1 are ever-changing thanks to fully destructible environments and dynamic weather. However, the new element in the game is that players now have more open terrain and greater freedom of choice in how they complete levels and approach battles.

Battlefield 1’s single-player campaign is split into six “War Stories”, or chapters told from the perspectives of individual Allied soldiers of different nationalities. Across the course of these six chapter-long missions, the player takes control of six unique playable characters and visits nine different maps.

Battlefield 1’s online multiplayer has both returning and new game modes. In them, players can join massive online battles with up to 64 players at a time.

A new Squad System makes it possible for groups of players to log in and out of gaming servers simultaneously.

Combat is intense and complex. Players can fight on foot, lead a cavalry, or use war machines like tanks, armored trucks, trains, and even the game’s legendary behemoths. You can fly warplanes and even bombard the land from warships at sea.

The game’s melee combat has received updates with the addition of new close-range weapons, classified as heavy, medium, or light. The weapon customization feature from previous games makes a return, giving players a number of options for styling their guns.

The game’s visuals and sound design cannot go unnoticed. Battlefield 1 has very realistic graphics with a lot of impressive visual effects during battles. The sounds of gunshots, footsteps, and grenade blasts are impactful and authentic.

Battlefield 1 has a lot of content to offer with its historically-inspired single-player missions and a variety of multiplayer modes. The gameplay is immersive and gives you enough freedom to develop your personal playstyle.

Can you play Battlefield 1 on Mac?

Battlefield 1 can be played on Mac in a number of ways. However, we need to make it clear that the game is not officially supported on Mac OS, therefore, the solutions that you will see below are workarounds that we believe will give you a gaming experience as close to the original as possible.

The first suggestion to play Battlefield 1 on Mac is to turn to cloud gaming solutions like Boosteroid or GeForce Now. These two cloud gaming platforms have the game in their rich libraries and can stream it in your browser in a matter of minutes. All you need is a subscription to their service and you will be good to go.

The second option requires the installation of a Windows OS on your Mac with the help of specialized Windows virtualization software such as Parallels or Boot Camp Assistant.

After you have a Windows OS running on your Mac with any of these two programs, you can then download the original game from Steam or Origin.

Each of the methods you choose has its own pros and cons, but, nevertheless, they allow you to play Battlefield 1 on a Mac and have a relatively good gaming experience.

You can download Battlefield 1 on your Mac from two popular game stores – Steam or Origin. However, in order to play the game locally on your Mac OS, you should first install Windows OS on your Mac machine.

Parallels and Boot Camp Assistant are two Windows virtualization programs that can help you set up Windows in a few simple steps.

An important note that we should make here is that owners of Intel-based Macs can use the Parallels app or the built-in Boot Camp Assistant while those with a Mac with an M1-based processor can use Parallels to create a Windows virtual machine. Below there are links with step-by-step instructions that explain the whole installation process.

After Windows is set up and running on your Mac, you can then use the Steam client or Origin to download Battlefield 1 and install it on the system.

How to Play Battlefield 1 on Mac

You can play Battlefield 1 on Mac via cloud gaming options like Boosteroid or GeForce Now. Alternatively, you can install Windows on your Mac via Parallels or Boot Camp Assistant and play the game there.

How to play Battlefield 1 on Mac M1?

If you have a Mac M1, you can play Battlefield 1 with Boosteroid or GeForce Now. These two cloud gaming services can stream the game in your browser in a matter of minutes and you won’t have to install anything on your Mac.

If you want to have Battlefield 1 downloaded on your Mac M1, then you can use Parallels to create a Windows virtual machine and play the game locally the same way that you would play it on a PC. This method does require the installation of additional software, but you can use it to play any unsupported games with Parallels on a Mac M1.

Play Battlefield 1 on Mac with Boosteroid

You can play Battlefield 1 on Mac (M1 and Intel models) with Boosteroid. Read our detailed guide.

How to Play Battlefield 1 with Boosteroid

You can play Battlefield 1 on Mac (M1 and Intel models) with Geforce Now. Read our detailed guide.

How to Play Battlefield 1 with Geforce Now

Play Battlefield 1 on Mac with Parallels

You can play Battlefield 1 on Mac (M1 and Intel models) by installing Windows on your Mac with Parallels. Read our detailed guide.

How to Play Battlefield 1 with Parallels

You can play Battlefield 1 on Mac (Intel models only) by installing Windows on your Mac with Boot Camp Assistant. Read our detailed guide.

How to Play Battlefield 1 with Boot Camp
Mac How To, reviews