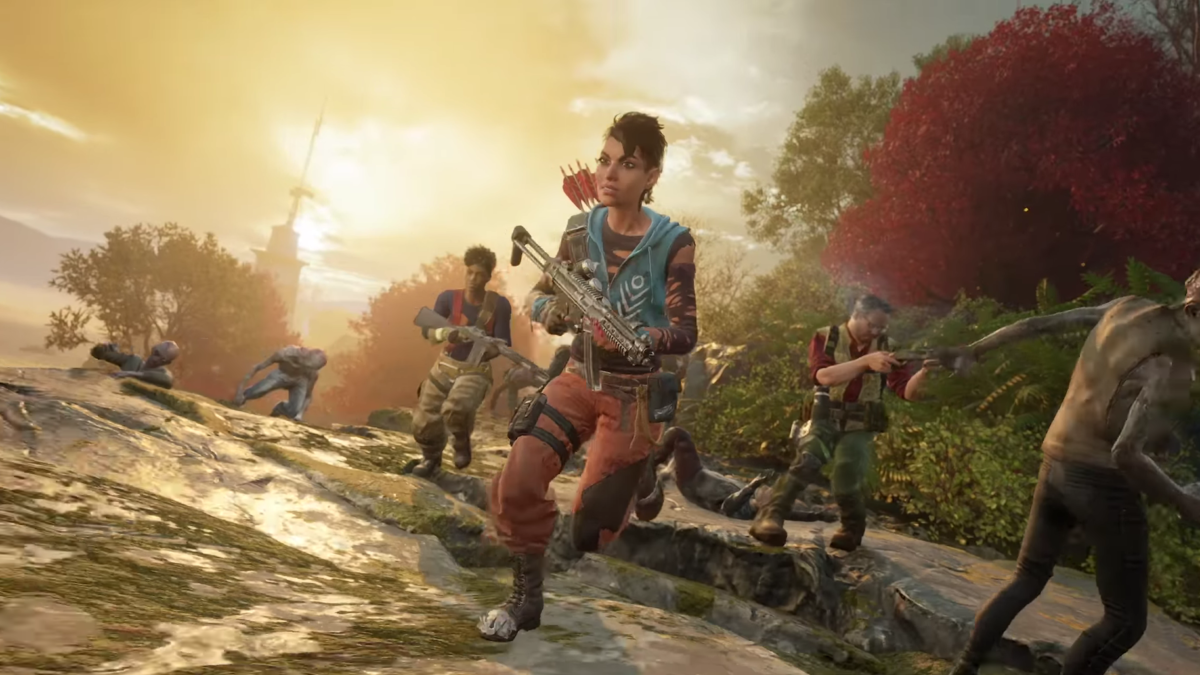 Back 4 Blood on Mac

Back 4 Blood is a first-person co-op shooter in which players join a four-person squad, tasked with eliminating hordes of zombie-like creatures known as the Ridden. Depending on the matchmaking choices and the players’ availability, teammates can be managed by human players or AI bots.

In PvE mode, the player can choose to control one of eleven playable, customizable characters known as “Cleaners” and fight a variety of enemies (the Ridden) that come in different shapes, sizes, and numbers.

The Cleaners and the Ridden are equipped with an arsenal of deadly weapons, tools, and skills.

An in-game currency called “copper” can be used to buy perks and extras for the characters in order to upgrade them.

A PvP mode called “Swarm” allows for pitting a team of Cleaners against a team of mutated Ridden in a closed area until they eliminate each other. In this mode, the player can choose to play either as a Cleaner or a Ridden.

A “rogue-lite” Card System generates unique gaming experiences every time. Thanks to it, players can create custom decks of cards that affect their character’s stats like health, damage dealt, and stamina. The card system also allows them to take on more challenging fights.

A unique AI system constantly makes adjustments based on the player’s progress. For instance, the AI can change the number and location of enemies, items, and obstacles to guarantee thrilling battles and a feeling of unpredictability.

Back 4 Blood is an exciting game that requires some getting used to at first. In order to make the most of the game, players need to learn about the different types of cards, the building of decks, and the right strategy for choosing characters based on more than just their appearance. However, once they figure out how everything works, the game becomes much more enjoyable.

Can you play Back 4 Blood on Mac?

Players of Back 4 Blood using Mac machines may be pleased to know that the game can be played on their mac. However, that cannot happen directly because the game has no official MacOS version. For this reason, they’ll need to use certain workarounds to play the Windows version of Back 4 Blood on their Mac.

Subscribing to a cloud gaming service like Boosteroid makes playing Back 4 Blood on a Mac the most convenient and quick option. Playing in this fashion eliminates the need to download or install the game since it can be played right inside the user’s browser.

Aside from using a cloud gaming service, you can play Back 4 Blood on your Mac locally by installing Windows through a virtualization program like Parallels or Boot Camp Assistant and then running the Windows game version on it.

Back 4 Blood cannot be downloaded or played on a Mac without first installing Windows OS. The use of Windows emulation software like Parallels or Apple’s Boot Camp Assistant (for Intel Macs only) makes this a lot less complicated than it seems. The links below will take you to more detailed information on how to utilize these two programs.

Once Windows has been installed on your Mac, you can buy Back 4 Blood from a game store using the store’s client, just like you would do with any other Windows game, and then install it using the same method you would use to install it on a Windows PC.

How to Play Back 4 Blood on Mac?

You can play Back 4 Blood on Mac with Boosteroid, or after you install Windows on your Mac via Parallels or Boot Camp Assistant.

A Mac M1 can run Back 4 Blood so long as the user subscribes to a streaming service such as Boosteroid. Parallels, a virtualization software, can also be used to play the game after creating a Windows environment on your macOS. The video game may then be downloaded on a Mac M1 and played whenever convenient. The Boot Camp Assistant is not compatible with the M1 CPU architecture, thus you will not be able to use it to install Windows on your Mac M1.

Playing directly on a Mac M1 has certain advantages over playing on the cloud. The fact that your internet connection speed won’t have any impact on your gameplay is a huge plus.

However, there are benefits to playing through a cloud service. To begin with, it can be done in a short amount of time and with little effort by anyone who has access to a web browser and a paid account with the cloud gaming provider who offers the game. Those low on disk space will also appreciate not having to download and install the game.

The links below will take you to guides on how to play Back 4 Blood on a Mac (both M1 and Intel).

Play Back 4 Blood on Mac with Boosteroid

You can play Back 4 Blood on Mac (M1 and Intel models) with Boosteroid. Read our detailed guide.

How to Play Back 4 Blood with Boosteroid

Play Back 4 Blood on Mac with Parallels

You can play Back 4 Blood on Mac (M1 and Intel models) by installing Windows on your Mac with Parallels. Read our detailed guide.

How to Play Back 4 Blood with Parallels

Back 4 Blood on Mac with Boot Camp Assistant

You can play Back 4 Blood on Mac (Intel models only) by installing Windows on your Mac with Boot Camp Assistant. Read our detailed guide.

How to Play Back 4 Blood with Boot Camp
Mac How To, reviews