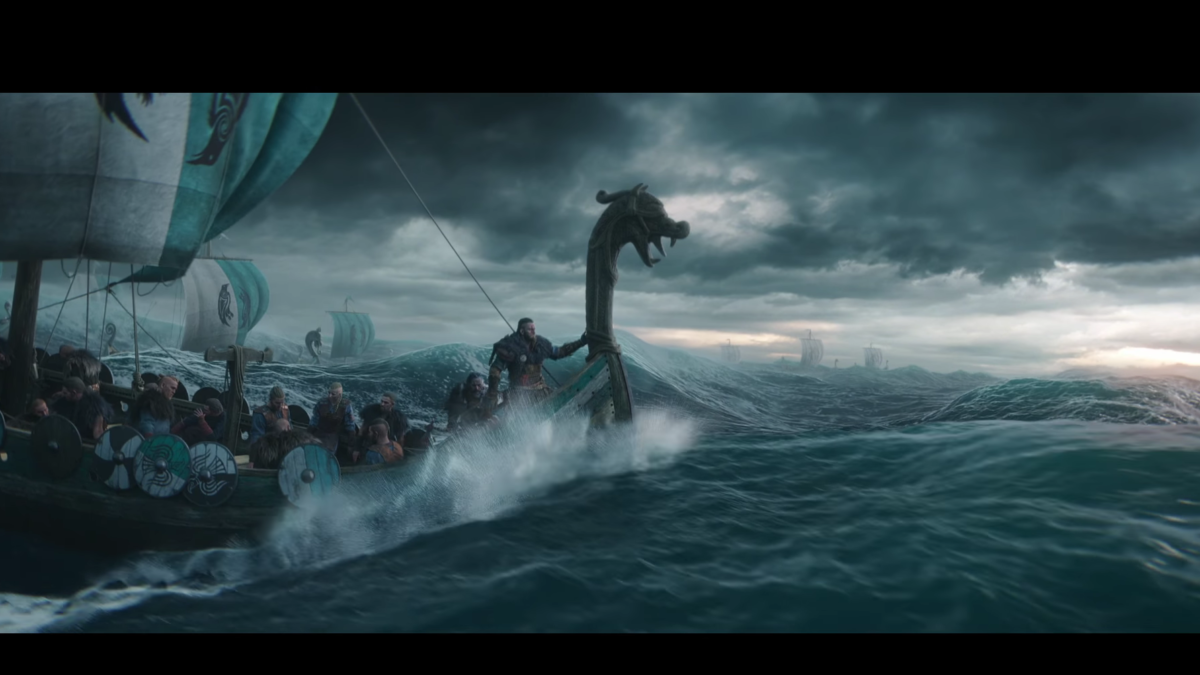 Assassin’s Creed: Valhalla is an action-adventure role-playing video game that invites players into a fictional story set in the years 872-878 AD. The game is the series’ twelfth main entry and a sequel to 2018’s Assassin’s Creed Odyssey.

In the time of the Vikings, England is a territory divided among several small lordships and warring kingdoms. Under all that mayhem is a land of untold riches, just waiting to be conquered.
Eivor Varinsdottir, a Viking raider trained from childhood to be a courageous warrior, decides to guide his tribe as they migrate from Norway’s frozen wastes to the fertile fields of ninth-century England to find a safe haven, conquer this thorn-in-conflicts land and earn his way to Valhalla (the hall of the slain). On his way, Eivor gets entangled in the strife between two factions – the Assassins and the Templar Order. The plot that follows his adventures is broken up into separate chapters, and each of them focuses on a certain area of the map.The main story has two very different endings, which are affected by the player’s decisions during the game.

The gameplay is structured around several main storylines and multiple side quests (called “World Events”) that players may choose to complete or ignore.

You play as Eivor Varinsdottir and your role is to lead your people against the Anglo-Saxon kingdoms. The character can participate in a wide range of activities, like combat, hunting, fishing, brawling with other Vikings, drinking competitions, and more.

Eivor can be played as a female or a male character, or the player can choose to have the game automatically switch between the two genders at specific parts of the story.

There are options for customizing the character’s hair, beard, clothes, armor, and tattoos for a more unique look. As he advances in the game, the player can select from a variety of skills to adjust the character’s playstyle.

Eivor is accompanied by a raven who may be used to distract enemies and explore specific locations from afar, just as previous bird companions have done in Assassin’s Creed Origins and Odyssey.

A new take on the iconic Eagle Vision mechanic from the series has been introduced with the “Odin Sight” feature which allows players to scan the environment for foes, hidden treasures, and more.

Stealth also plays a major role in the gameplay. The “social stealth” mechanic from previous Assassin’s Creed games is back, allowing Eivor to use different static objects from the environment to hide, as well as pull down his hood and blend with certain crowds. The character also has the ability to fake their own death.

Combat allows for dual-wielding (the use of two weapons, one in each hand) of practically any weapon, which makes for an exciting fighting experience.

The Conquest Battles, first seen in Odyssey, make a return in Valhalla as “Assaults” in which the player commands armies to conquer enemy strongholds.

There are also short-duration fights called “Raids” in which the player commands a raiding group who attacks enemies in search of supplies and resources for their own settlement.

The arsenal of weapons that are available in Valhalla has been expanded, compared to that in previous games, and now players can play with greatswords and flails.

Ships have made a return from previous installments, but in AC: Valhalla, they are mainly used as means of transportation for raiding and escaping after a land battle. They are rarely used for naval combat.

Aside from entering a battle, there are dialogue options that allow the player to address some conflicts diplomatically. The decisions he makes have an effect on the other non-playable characters and their political affiliations.

To keep the player on their toes, the developing team has included a greater variety of enemy archetypes, compared to those seen in earlier releases.

As the player gains new skills, the enemies also get progressively more challenging. For instance, they can use certain objects to their advantage. In addition, some foes might learn from the player’s tactics and develop countermeasures.

With the exception of the game’s bosses, however, most of the enemies can be killed with a single attack using a well-planned move and a smartly selected weapon.

Assassin’s Creed: Valhalla can be praised for its voice acting, its visuals, and its soundtrack, which immerse players in the narrative and create an impactful atmosphere.

Players can find a lot of historically accurate elements that give the game a credible and authentic portrayal of England during the Viking invasion.

They can also enjoy beautiful landscapes that have been recreated with impressive visual fidelity. The soundtrack is a blend of both traditional Viking music and modern gaming tunes.

Assassin’s Creed: Valhalla is a Viking adventure that has something for everyone thanks to its compelling mix of warfare, open-world exploration, and colony management elements. The game is massive and can give you hundreds of hours of fun and challenges, as you dive into the brutal life of a conqueror.

Can you play Assassin’s Creed: Valhalla on Mac?

Assassin’s Creed: Valhalla can be played on Mac. However, there is no official MacOS version of the game, for this reason, we will go through the workarounds that fans will need to use in order to play the game on their Mac machine.

If you are into cloud gaming, you can use GeForce Now to play Assassin’s Creed: Valhalla in your browser. This method is the fastest one because it does not require you to download and install the game and it also saves you disk space. To stream the game, however, you need to have an account and a subscription to the cloud gaming service.

Installing Windows on your Mac with the help of Parallels or Boot Camp Assistant is another convenient option that may give you an adequate gaming experience. Once you have a Windows OS running on your Mac, Assassin’s Creed: Valhalla can be downloaded and played on the Mac from Steam.

Below you will find detailed instructions on how to use each of these programs before attempting to run the Windows PC version of Assassin’s Creed: Valhalla on a Mac.

If you’re using a Mac and want to play Assassin’s Creed: Valhalla, you’ll need to create a Windows virtual machine first (VM). If you have a Windows virtualization tool like Parallels or Boot Camp Assistant, you can run games that aren’t officially supported on a Mac and still have an adequate experience by creating a virtual machine (VM) and installing the game inside of it.

Once a Windows OS virtual machine has been created with any of the programs above, Assassin’s Creed: Valhalla can be downloaded from Steam and installed on it in the usual way you normally install Windows games.

How to play Assassin’s Creed: Valhalla on Mac?

To play Assassin’s Creed: Valhalla you need to first get the game:

After that, you need to select a method to play:

How to play Assassin’s Creed: Valhalla on Mac M1?

Assassin’s Creed: Valhalla can be played on a Mac M1. The game can be downloaded from Steam, but first, you’ll need to set up a Windows virtual machine using Parallels.

Keep in mind that Parallels is simply a temporary solution and will not provide the same gaming experience as a native Windows installation. However, even if the version of Assassin’s Creed: Valhalla on Steam isn’t officially supported on Mac, you can still play the game with a satisfying gaming quality by using a virtual machine.

Another way to play Assassin’s Creed: Valhalla is by streaming it via GeForce Now. This method is quick and can save you time, as well as the need to install the game or any additional software. However, in order to have a smooth gaming experience, you need to have a fast and stable internet connection and a subscription to the service.

This Full Parallels Guide can give you more detailed instructions on Parallels, in case you some more assistance in setting up the program and Windows.