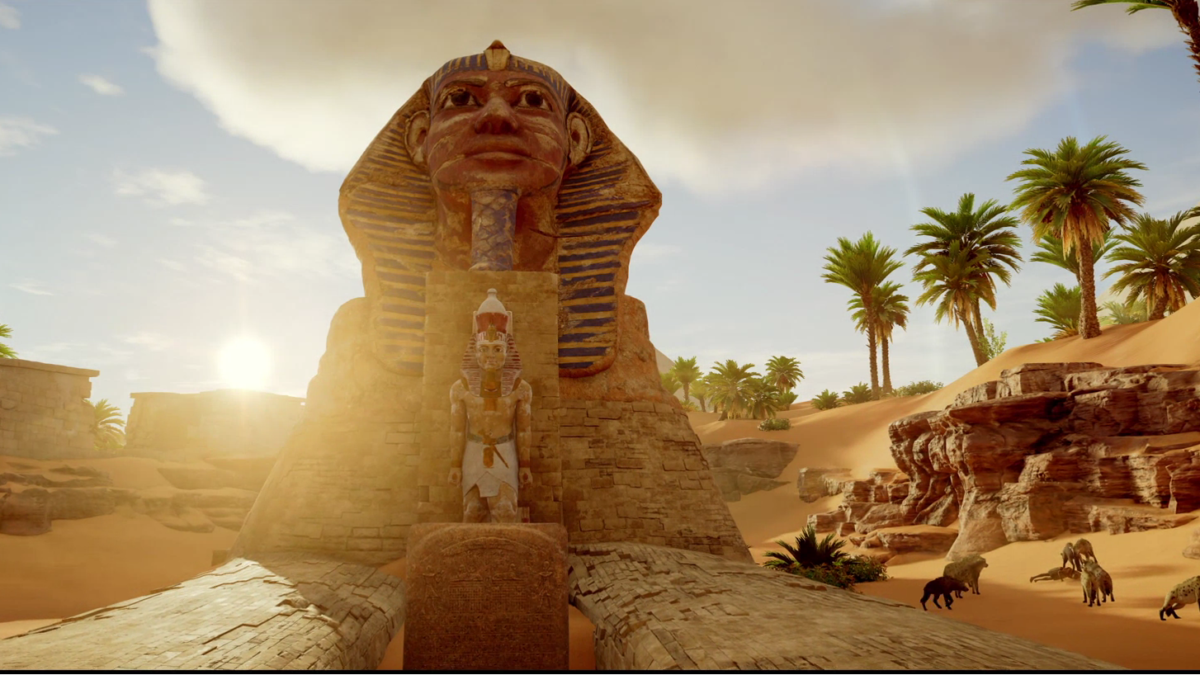 Assassin’s Creed Origins is an action-adventure role-playing video game that is played from a third-person perspective. The game marks the series’ tenth major entry and is set in Egypt toward the end of the Ptolemaic period, between 49 and 43 BC. The plot centers on a protagonist named Bayek of Siwa and his wife Aya and follows his adventures as he seeks revenge for the murder of his son and investigates the origins of the conflict between two factions—the Hidden Ones and the Order of the Ancients.

As they traverse the environment, players run into a wide variety of non-playable characters that give them optional quests (which often include rescuing captives, battling foes, collecting objects, or exploring things of interest) and send them to interesting locations where they can find different rewards.

Throughout the game, players can also solve puzzles, discover riches by exploring tombs and pyramids, and engage in gladiatorial arena competitions.

Completing main and optional quests, exploring new areas, and killing enemies are all good ways for the main character to gain experience points, which can unlock new skills and abilities.

Players can choose how to deal with enemies, with both stealth and open combat being viable options.

Combat includes heavy and light attacks with various melee weapons that deal specific damage. During a battle with different types of foes, players can dodge and parry attacks and switch up their weapons accordingly.

What Origins stands out with is that it introduces a “hit-box system”, which allows the player to hit or miss their enemy by striking at whatever is in their range.

Aside from the melee attacks, the player can use the environment to his advantage. He can take cover in the bushes or run over the roofs of buildings to evade detection. He also has access to equipment like sleeping darts, poison darts, and firebombs.

To defeat stronger enemies, players need to use a combination of stealth and melee attacks, as well as a hidden blade for close-range strikes.

The series’ signature “eagle vision” function, which allows players to scout out an area by highlighting nearby enemies and items, is replaced with an eagle companion to the main character who flies high up and checks a site in advance.

During some parts of the game,  players are put in charge of a ship called Aya, which they can sail and use to launch attacks on enemy ships.

Assassin’s Creed Origins shines with its authentic representation of ancient Egypt. Players can see sights of deserts, oases, rivers, and lakes, as well as the ruins of once-great cities like Alexandria and Memphis. The buildings have unique architecture that reflects their origins, and most locations are recreated by handcrafting.

The music in Origins can be described as an atmospheric blend of Egyptian melodies and electronic sounds that perfectly fit the game’s setting.

Assassin’s Creed Origins is a solid and enjoyable game that can give you plenty of memorable gaming moments. The developers have done a great job of immersing you in a content-filled open world, recreated with aesthetically pleasing and historically authentic sites, without forgetting the balance between stealth, combat, exploration, and adventure.

Can you play Assassin’s Creed Origins on Mac?

Fans of Assassin’s Creed Origins may be happy to learn that the game can be played on a Mac machine. However, to do that, they need to run the Windows version of the game on their Mac by using some workaround techniques.

If you own a Mac, playing Assassin’s Creed Origins is the most accessible and fastest when you subscribe to a cloud gaming service like GeForce Now. In this way, downloading or installing the game is not necessary and you can play by streaming it directly in your browser.

If you don’t want to use a cloud gaming service, you can play Assassin’s Creed Origins on your Mac locally by using a Windows virtualization tool like Parallels or Boot Camp Assistant.

Installing Windows OS is a must for downloading and playing Assassin’s Creed Origins on a Mac. Using Windows emulation software like Parallels or Apple’s Boot Camp Assistant (for Intel Macs only) makes this much simpler than it seems. More details on how to use these two programs can be found in the links below.

After you have Windows set up on your Mac, you can purchase Assassin’s Creed Origins from a game shop and install it on the newly created Windows OS by using the store’s client, just like you would do with any other Windows game.

How to Play Assassin’s Creed Origins on Mac?

You can play Assassin’s Creed Origins on Mac with GeForce Now, or after you install Windows on your Mac via Parallels or Boot Camp Assistant.

How to play Assassin’s Creed Origins on Mac M1?

Assassin’s Creed Origins can be played on a Mac M1 by using a streaming service like GeForce Now. Another way to play is to use a Windows VM created with Parallels. In this way, the game can be downloaded and played locally. Unfortunately, Boot Camp Assistant cannot be used to install Windows on a Mac M1 due to incompatibility with the M1 CPU architecture.

There are advantages to playing games on a Mac locally instead of online. A major one is that the speed of your internet connection won’t affect your gameplay, which is crucial for a satisfying gaming experience.

On the other hand, there are advantages to using a cloud service for gaming too. First of all, it is quick and simple – all you need is a browser and a subscription to the service. Skipping the download and installation process can save you space on your hard disk, which also is important if you don’t want to fill your machine with games.

You can learn more about the methods to play Assassin’s Creed Origins on a Mac (both M1 and Intel) if you click on the links below.

You can play Assassin’s Creed Origins on Mac (M1 and Intel models) with Geforce Now. Read our detailed guide.

How to Play Assassin’s Creed Origins with Geforce Now

You can play Assassin’s Creed Origins on Mac (M1 and Intel models) by installing Windows on your Mac with Parallels. Read our detailed guide.

How to Play Assassin’s Creed Origins with Parallels

You can play Assassin’s Creed Origins on Mac (Intel models only) by installing Windows on your Mac with Boot Camp Assistant. Read our detailed guide.

How to Play Assassin’s Creed Origins with Boot Camp
Mac How To, reviews