How to Use GeForce Now on Mac 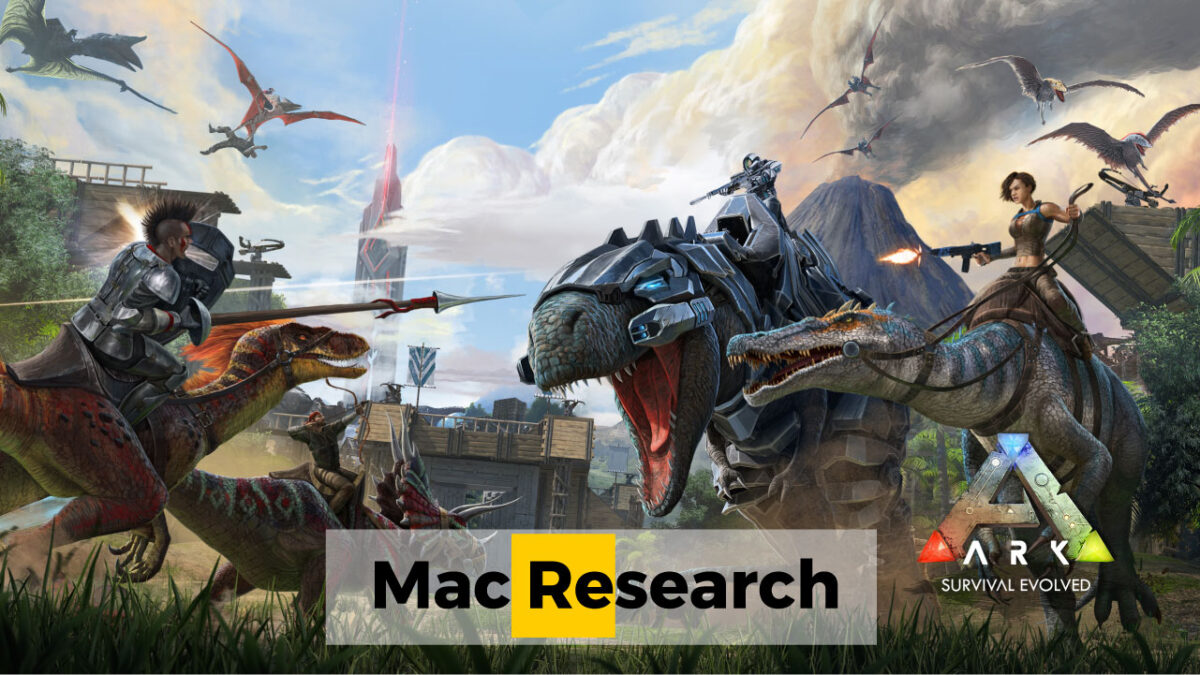 About Ark Survival Evolved on Mac

Ark Survival Evolved is an action-adventure survival game developed by Studio Wildcard. The game’s premise is that the player finds themselves on a large mysterious island in the middle of nowhere with nothing but some modest clothing on their backs and the initial task of finding a way to survive. There, however, is a twist – the island is inhabited by all sorts of prehistoric animals that are extinct in the real world.

While traversing the gameplay world and struggling to survive, the player would encounter dinosaurs, woolly mammoths, saber-toothed tigers, and other beasts of the past that pose a great danger to the player but could also be tamed and used as a means of transport and protection.

The game is played from a third-person and first-person perspective and it employs a lot of typical survival RPG mechanics, such as base-building, resource-gathering, crafting items and weapons, and improving the technology available to you. While at the start of the game you may only have access to crude weapons and tools such as clubs and primitive spears, once you progress through the tech tree, you could get to use rifles, machine guns, tranquilizer darts, and more. This, however, is one of the aspects of this game that gets the most criticism.

While it’s nice to have such steady progression during your game play experience, both critics and regular players have noted that Ark Survival Evolved tends to hit a point where it becomes way too grindy for the liking of most people. Just as you are getting to the good stuff – the more advanced tools, weapons, and technology, you are likely to find yourself needing to spend entire in-game days just to gather enough ammunition needed for a certain weapon.

This can really bog down the gameplay experience and turn the otherwise fun and enjoyable progression mechanics into a chore, which is a shame because Ark Survival Evolved has a well-thought-out and realized flow of technological progression that feels meaningful and logical instead of being a simple increase in player stats.

One of the main gameplay mechanics of Ark is the ability (and usually necessity) to tame the various types of animals that you encounter. Most of the animals in the game can be tamed with only a few exceptions. Depending on the specific animal, the method of taming it varies. There are two main taming methods – violent taming and passive taming.

Most animals can only be tamed through the violent method, which involves knocking the animal out using blunt weapons or tranquilizer projectiles and then feeding the animal its preferred food until it is tamed. A lot of animals need to be kept sedated, using narcotics extracted from plants, until they are tamed. Once tamed, a dinosaur or another animal can be ridden by the player in order to get around quicker. Larger animals can also be used used for protection or offense.

Similar to lots of other survival RPGs, Ark has an experience system that allows you to level up your character and thus increase their stats. There are different stats in the game: max hitpoints, oxygen, food meter, water meter, carry weight, movement speed, melee damage, crafting speed, and stamina. With each level gained, you get to choose which of those stats you are going to improve, which would then affect how you progress further through your playthrough.

As mentioned, Ark is both a single-player and a multiplayer game. In single-player, the game offers an extensive campaign with a concrete storyline that the player gradually unravels as they progress through the game. While playing through the campaign, you’d need to explore various caves in order to acquire different artifacts and eventually summon three bosses that you must defeat.

The boss battles are both engaging and challenging, but they tend to overuse the “summoned minions” cliche/trope in order to become more difficult. Once all of the three bosses have been defeated, an end-game dungeon gets unlocked and exploring it reveals to the player a lot about the Ark world and its lore. This attention to story greatly elevates the single-player campaign into something more than just a grind to obtain the equipment and tools needed to finally tame that T-Rex and ride it into the sunset.

In multiplayer, more than a hundred players can populate a single server, where they can form tribes and work together to advance quicker through the technology tree. This is where the grinding element of the game is both more and less noticeable, depending on whether you have buddies to work with you or not. If you are on your own, progress would be even more of a struggle compared to the single-player experience. If, however, you have other people working with you, you would be able to get much further, much faster, especially if there is always someone from your tribe who is online, protecting your base from potential looters. Overall, both the single- and the multiplayer of Ark offers a charming experience that leaves you wanting more, that is if you can ignore the grinding and the bugs.

Speaking of bugs, being an indie game, Ark has quite a lot of them. Even though the game was released back in 2017 (and has been in early access since 2015), and a lot of improvements have been made since then, there are still quite a few annoying bugs, such as animals getting stuck on random terrain, shadows popping in and out, and sudden frame rate drops.

The most annoying glitch has to be the one where the AI of larger hostile animals fails to find the right pathing to the player and gets stuck. This largely trivializes the process of hunting down those animals and takes away a lot of the challenge. Admittedly, none of those are game-breaking bugs, but it can still be unpleasant when you encounter them.

If what’s been said about the game thus far interests you, you can install Ark Survival Evolved on your Mac right now from Steam or Epic Games Store. The game has been available for OS X since its release, so you won’t need to resort to any time-consuming resort methods, such as installing Windows on your Mac, in order to play it. Furthermore, being released back in 2017, Ark Survival Evolved isn’t a particularly demanding game (see system requirements down below), so even if you don’t have the latest Mac model, you should still be able to run it on your machine. On the other hand, if you think that your Mac may not provide you with particularly good performance, you can also use the Google Stadia gaming service to play it on a remote gaming rig without even needing to install it on your Mac (more on that in a bit).

The Lost Island expansion map is the first DLC for the game developed by the Ark Survival Evolved community and as such it is free for download. Of course, in order to play it, you need to have already purchased and installed the base game. The expansion features three new creatures and a brand new map with its unique terrain, biomes, caves, and challenges. The new map is huge – approximately 150 sq km. In comparison, the map of the base game is around 50 sq km.

Note that the expansion is quite large in size – it’s around 20 GB, so be sure that your Mac has enough space to accommodate it before you attempt to download it.

Ark is now available to play on cloud gaming servers. This assures NO
compatibility issues while playing on your Mac as well as top-notch performance.

Before playing ARK make sure you get the game through the official websites. For the moment only Steam and Origin are compatible with cloud gaming services such as Boosteriod and Geforce.

All you need to do now is register for Boosteroid. This allows you to add Ark to their Cloud Gaming Library. Once uploaded you can seamlessly play the game from your Mac.

M1 Macs come with the latest macOS release available, and since the Mac version of Ark isn’t playable on anything past Catalina, you will need an alternative way to play the game, such as using Parallels.

Parallels is a virtualization tool that allows you to simulate the Windows experience on your Mac without actually having to install Windows in a separate partition. This happens by creating a Windows virtual machine in which you can download, install, and run Windows programs and games, all the while your Mac stays booted in macOS. Instructions on how to use this tool to create a virtual machine on your Mac are available below. Note that the program is paid, but has a two-week free trial. We recommend trying out the free trial to see if the game runs smoothly on your Mac through Parallels.

All of those methods are viable, so it’s up to you to decide which one better suits your needs. If your Mac is running on an OS X release earlier than 10.15, then playing the game should be a simple matter of downloading it from Steam and installing it on your Mac (see below). However, if you are using a newer macOS version, the only way to install and play the game would be through Boot Camp Assistant or with the help of virtualization software. Alternatively, you can try playing the game with the help of Google Stadia – you can learn more about this cloud gaming service down below.

As mentioned, Google Stadia is a cloud gaming service, which means that, when you are playing games through it, the game would really be running on a remote gaming rig, with you being in control of the gameplay from your Mac and the gameplay being streamed in real-time to your screen – think of it as an interactive and much more advanced version of screen share. The advantage of this is that, as long as your Mac meets the requirements for using the Stadia service, it doesn’t really matter if it meets the requirements of the game itself. In other words, you can play any game at very high resolution and display settings even from a much weaker machine. However, one downside is that, since all of this is happening over the Internet, you need a very good and fast Internet connection in order to get a smooth gameplay experience. Furthermore, if you are playing online, your Internet would need to be even better so as to minimize lag.

Another thing that should be noted is that Google Stadia is a paid service that has no free subscription plan, so not only would you have to pay for the game itself, but you’ll also need to pay the monthly subscription fee for the gaming service. Obviously, you can end and renew your subscription at any time, but it’s still something to keep in mind. Also, though there isn’t a free plan, there’s one month free trial period, so you can use that to play any game that you own, including Ark Survival Evolved, for free for a month through Google Stadia.

If you want to learn how to set up and use Google Stadia, please, visit this page.

Whether your Mac is running on macOS 10.14 or earlier and you want to install the OS X version of the game or you have installed Windows on your Mac and now want to download the Windows version of Ark Survival Evolved, the steps to do this are nearly the same:

How to Use GeForce Now on Mac