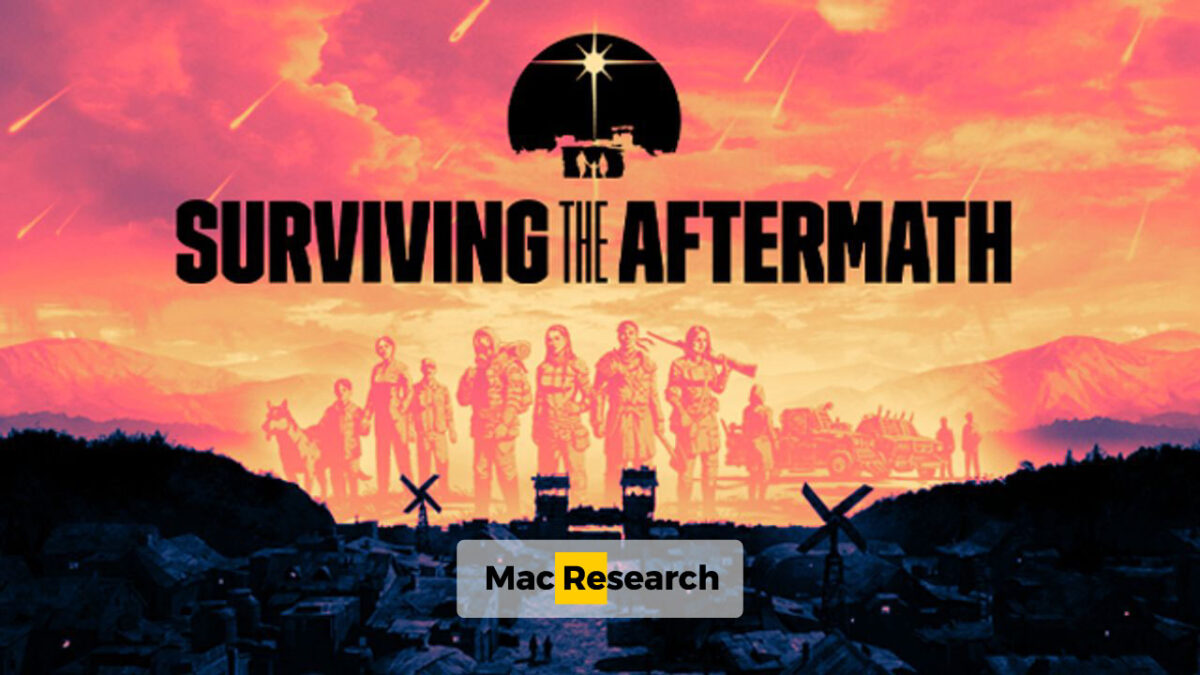 Surviving the Aftermath on Mac

The game is a fun city-building and survival game produced by Iceflake Studios that will keep you entertained for hours. The game immerses players in a world where they have to construct colonies and outposts while attempting to stay alive in the face of a variety of disasters and invasions.

With mankind’s hubris has come the end of the world, and those who have survived have been forced to deal with an array of apocalyptic catastrophes, including nuclear fallout, fire raining down from the sky, disease, deadly winter storms, bandits, and survivors savagely attacking one another. Surviving the Aftermath takes you in this environment, and it is up to you to form a small colony of survivors and ensure that you not only survive, but that you ultimately develop, expand, and maybe, just maybe, prosper as a result of the proper management.

When you get through the initial setup, the gameplay experience takes over and becomes the focus of your attention. You will receive objectives and be asked to make decisions from time to time, but all of this will be absorbed into the game’s mechanical core.

Surviving the Aftermath starts out slowly, placing you on a generated territory with only a handful of survivors and a restricted number of options for building and improving. You’ll spend the first hour or two primarily constructing rudimentary structures to meet the fundamental needs of your colonists, such as shelter and food, while also collecting resources to use in the construction of those structures. Once you’ve completed the construction of your colony’s gate, the real action begins, because not only can you start accepting more survivors to expand your settlement, but you can also begin dispatching your Specialists out into the world map to gather resources and scout out more of the map at that point.

As you play the game, you’re constantly occupied with micromanaging the inner workings of your colony and ensuring that people are put to work on the things that you require in the near future, but you’re also constantly working towards more long-term, big-picture goals, such as unlocking upgrades in the tech tree across a variety of different categories. The two halves of the experience grow intertwined, and obtaining more wood or plastic becomes just as crucial as improving your tents or unlocking new structures and buildings.

In addition, as you accept more survivors into your colony and hire more specialists, the rate at which your settlement develops and progresses exponentially improves, allowing you to explore more of the map and, as a result, to extend your colony even further. Once you get a grasp on the game’s fundamental ideas, everything starts to fall into place fairly quickly.

During the game, you will be tasked with putting out fires from time to time and solving some problems, such as dealing with sick or injured colonists or dealing with attacks from wildlife. Most of these emergencies become automated once the proper structures or people are in place. However, they remain engaging because you must ensure that the proper structures and people are in place before you can move forward. Other issues, such as cataclysms that occur from time to time – such as nuclear fallout and winter storms – necessitate more immediate action, and it is here that the game’s post-apocalyptic scenario is most engaging in providing more duties and challenges.

Then there are the instances when you’re required to make decisions. Each and every colonist may come to you with a situation that will require you to make judgments as their de-facto leader on a regular basis. Perhaps someone will come to you with a new experimental proposal that, while not assured to be successful, could prove to be highly valuable if it does work. Someone else may bring your attention to the fact that someone in the colony has been stealing resources, leaving you to determine how to deal with the individual in question. When faced with these situations, how you respond has an impact on the general happiness of your people.

Speaking about visuals, Surviving the Aftermath is a visually pleasing game on the whole. There are no major performance concerns and the game maintains a fair level of visual quality throughout its playtime.

Can you play Surviving the Aftermath on Mac?

If you are excited about a game that puts you in the shoes of a leader, occupied with keeping your little people alive by making sure they’re collecting enough resources and researching the best things to spend those resources on, Surviving the Aftermath is a perfect game for you.

The game has no Mac version but if you want to play it on your Mac machine, in the next lines, you will find detailed instructions on that.

How to play Surviving the Aftermath on Mac

The cloud-gaming options we mentioned require no more than 10 minutes to set up and will provide you with great performance regardless of how powerful your Mac is, so long as your Internet connection is fast and stable. It is especially easy to play Surviving the Aftermath through Boosteroid because all you’d need is a Boosteroid account and the Google Chrome browser. Below are our quick instructions on how to play Surviving the Aftermath via cloud gaming, but before you try them, you must already own the game to be able to play it, so go to Steam to purchase it.

Surviving the Aftermath Set Up Methods

Surviving the Aftermath with Cloud Gaming

Surviving the Aftermath is now available to play on cloud gaming servers. This assures NO
compatibility issues while playing on your Mac as well as top-notch performance.

Step 1. Get Surviving the Aftermath

Before playing Surviving the Aftermath make sure you get the game through the official websites. For the moment only the Steam version is compatible with cloud gaming services such as Boosteriod and Geforce.

All you need to do now is register for Boosteroid. This allows you to add Surviving the Aftermath to their Cloud Gaming Library. Once uploaded you can seamlessly play the game from your Mac, TV, or Mobile Device.

Play Surviving the Aftermath with Boosteroid

Surviving the Aftermath on Mac with Parallels

Surviving the Aftermath on Mac M1

All the methods for playing Surviving the Aftermath that has been presented to you on this page are usable on M1 Macs, with the exception of the Boot Camp Assistant one. If you want to install Windows on your M1 Mac in order to download and play Surviving the Aftermath, you will need to use Parallels to create a Windows 11 virtual machine with a VHDX file from the Windows Insider Program.